The UK capital’s soil bears a poisonous legacy from the Blitz bombing campaign – with calcium, lead and zinc pollution highest in the most heavily damaged areas.

Researchers from the British Geological Survey found that anomalous high calcium, lead and zinc levels in some parts of London were caused by the distribution of building dust and debris following the large-scale destruction of historic housing stock. These elements were widely used in paints, piping and mortar during the construction boom of the 19th century.

The presence of large quantities of calcium, the main ingredient of lime, in central London soil had been previously observed. Don Appleton, a geochemist at the British Geological Survey in Nottingham, and his colleague Mark Cave, were determined to find out why.

‘Traditional mortar contains a lot of lime, so if a building would be destroyed then the dust would spread in the surrounding area,’ Appleton explains. ‘We were thinking, was [the calcium enrichment] related to bomb sites?’

The team compared data on soil pollution with a map of the 31,373 sites bombed by the Luftwaffe – Nazi Germany’s air force – between October 1940 and June 1941. Areas bombarded in the 1940s had levels of calcium, lead and zinc that were up to 1.75 times higher than in areas built-up after the war or those that escaped the bombing. 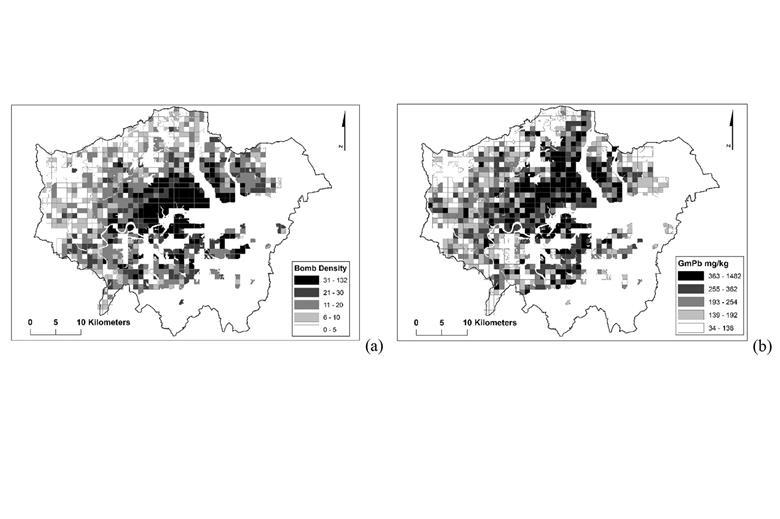 Other built-up areas of London, however, also showed elevated heavy metal levels, if not quite as high as those bombarded during the Blitz. Appleton says that some of these metals, especially lead, are distributed by exhaust fumes from cars. The researchers found that lead enrichment in London soil increases with proximity to roads as well as bomb sites, hinting at a more complex pattern of pollution. ‘If you get closer to roads, that’s where the buildings are,’ Appleton says. ‘That makes it sometimes difficult to work out what exactly is the major cause.’

Heavy metal pollution is dangerous to human health, especially children who might ingest lead or zinc while playing on polluted land. Vegetables grown on such soil, for example in urban gardens, can also have enriched levels of toxic metals.

However, the chemical make-up of London’s soil provides some protection. London was built on large chalk deposits, which increases the pH of the soil and locks up heavy metals, says Mike Fullen, a soil technology professor at the University of Wolverhampton. ‘Even though these metals are there, it is not easy for them to get into the biological system.’

Many British cities are built on the most fertile land, as this is where ancient farming communities settled. The Thames terrace, for example, has some of the richest soil in England, but is now mostly covered by Heathrow Airport. As a result, even if land is subsequently freed, it loses much of its fertility due to urban pollution.

While the removal or chemical cleaning of soil is expensive, Fullen’s team are working on developing cheaper and environmentally friendly methods to remove heavy metals. In China, students from the University of Wolverhampton are planting carnations on soil polluted with cadmium. The plants act as so-called hyper-accumulators by drawing toxic materials into their roots.

Fullen says this method could be used on London’s brownfield sites, and even in parks created on former bomb sites. ‘If you are not looking to reuse the land straight away, the cheapest option is to plant something that will soak up the toxins, and that can then be burned in a safe place,’ he says.

View all posts by Keeping_Cool